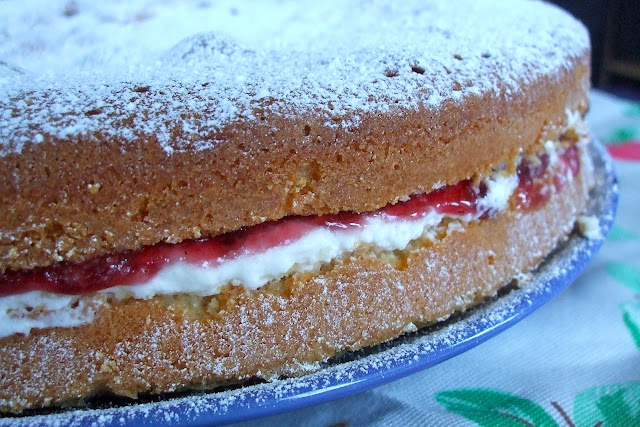 I don't have much to say about this cake other than doesn't it just have the prettiest name? I'm speaking totally objectively here - Victoria is THE best name in the world. Innit?

If I'm being honest, I never buy Victoria Sponge cakes or order them in coffee shops but every once in a while, I'll have a good one that reminds me why this is such a classic cake. The flavours are simple but when done well, are the perfect accompaniment to most hot drinks, perfect for tea time or y'know, breakfast.
And who better than Nigella Lawson to turn to for the best recipes? This is from her book "How to be a domestic goddess.

For the filling
2-4 tablespoons raspberry or other jam, depending on the berries
1 punnet raspberries or berries of choice
125ml (or simply a 142ml tub) double cream

Note: I used a bigger cake tin which is why I have a larger, thinner cake. I also didn't use any fresh fruit in mine. 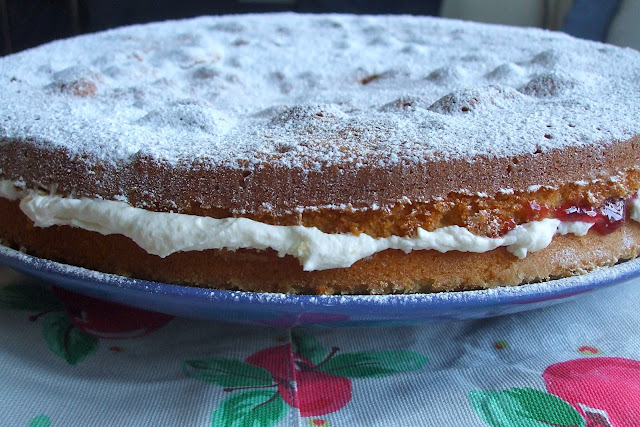 If you answered "yes" to that question, then I'm sorry but we can't be friends. Because you're obviously a bit insane. I mean, nobody likes Mondays! Except for my brother who is one of those people who likes to get the week started because it is a whole new opportunity to get things done and done right and be who you were meant to be and blah blah ... let's just say we live on two different continents. Literally and metaphorically. (Disclaimer: I love my brother very much and get on with him really well!)

I don't like Mondays because despite the fact that I don't usually sleep in on weekends, Monday removes ALL possibility of sleeping in for at least five days!

I don't like Mondays because I've usually not done half of the chores I set myself to do over the weekend.

I don't like Mondays because I have to go to work and much as I appear to be a not-lazy sort of person, I'm pretty sure I would make a great bum if I could afford to just not work ever!

I don't like Mondays because ... ah, I'm going to stop with the Monday blues! How was your weekend? I went to visit my family in Birmingham and ran the Bupa Half Marathon yesterday which despite my doing very little actual running training, I really enjoyed! I did it last year and it seemed like everything went wrong - I had painful shin splints for the first 5 miles, I nicked my tongue in the bottle cap at mile 3 and therefore had a bleeding tongue (it was minor but in my head I thought I might have to lose my tongue from the sheer amount of blood loss), one of my headphones didn't work so I didn't have the loud pumping music I like to run to and as it was my first hilly marathon, when we got to the hills at the end, I could have sworn they were the steepest hills in the whole wide world! Turns out they weren't that steep and despite my complete lack of training, I did a similar time as last year (less than a minute quicker) - 2 hours and 33 minutes which I was more than happy with. My sister blew 12 WHOLE MINUTES off her last year's time and finished in 2 hours and 15 minutes so I'm much happier for her!

So that was my weekend. Tell me about yours and enjoy my pretty pictures in the meantime. By the way, these bars are great! All the flavours are familiar but together, they are really wonderful and unexpected. I love them and can wait to try different flavour combos as Joy recommends. 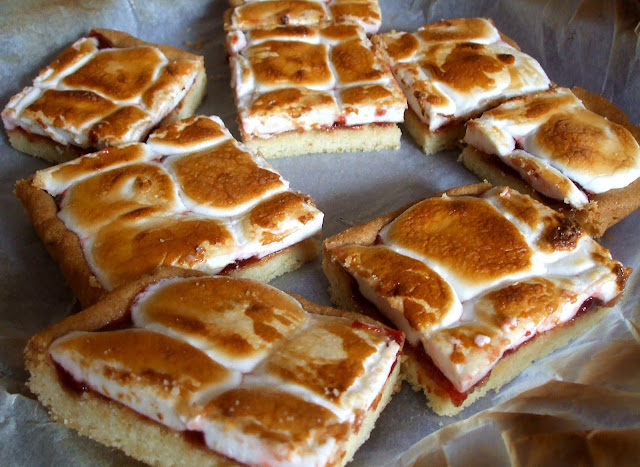 Recipe from the wonderful Joy the Baker

1 - Place rack in the center of the oven and preheat oven to 180C / Gas Mark 4 / 350F. Line an 8-inch square pan with greaseproof paper (leaving some overhanging paper flaps on two ends) and grease paper. Set aside.

2 - In the bowl of an electric stand mixer, fitted with a paddle attachment, beat together butter and sugar until pale and fluffy, about 3 minutes. Stop the mixer, scrape down the sides of the bowl, then beat in vanilla bean scrapings (or vanilla extract) and egg yolk. Beat until well incorporated. Stop the mixer and add flour. Beat on low speed until completely incorporated.

3 - Spoon batter into prepared pan. Sprinkle with flour. With clean fingers, press the dough into the bottom of the pan. Use a bit more flour as necessary so that the dough doesn't stick to your fingers. Try to make the crust as even as possible. 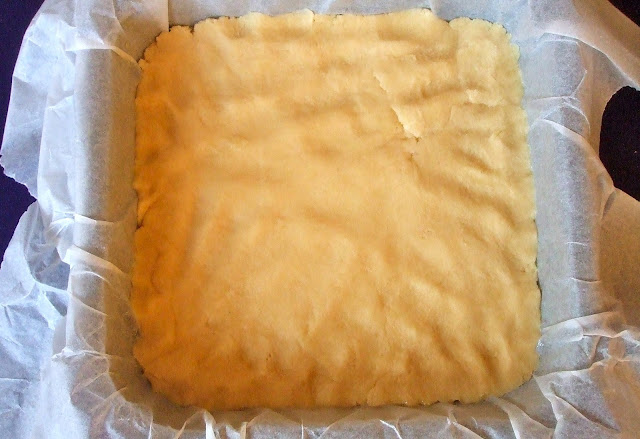 4 - Bake crust for 20 - 24 minutes until golden brown around the edges, but still slightly soft in the center. Remove from the oven and allow to cool for 20 minutes.

6 - Top crust with a thin layer of fruit preserve (I used Strawberry). Arrange marshmallows on top of jam. 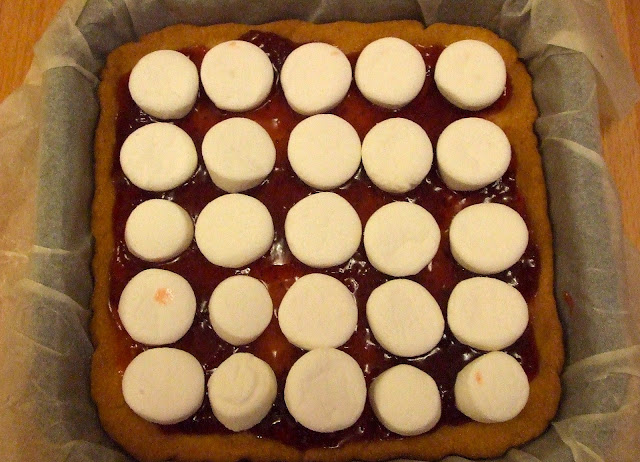 Return to the oven for about 4 minutes. This will warm and soften the marshmallows. Remove from the oven and turn the oven on to the grill setting. Use the back of a spoon to gently press and smash the top of each marshmallow. 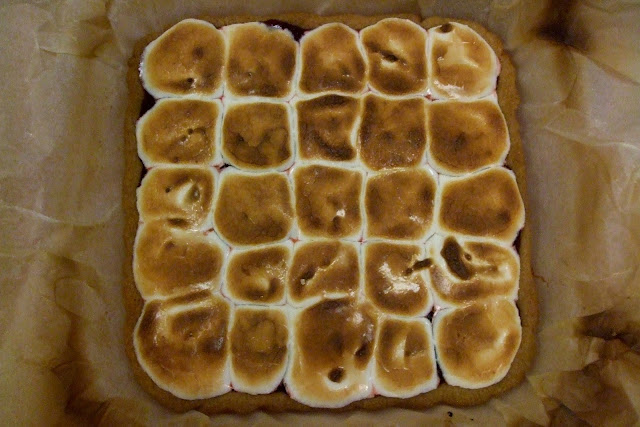 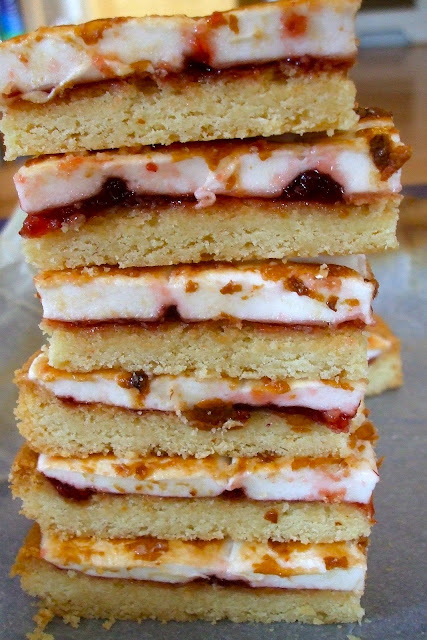 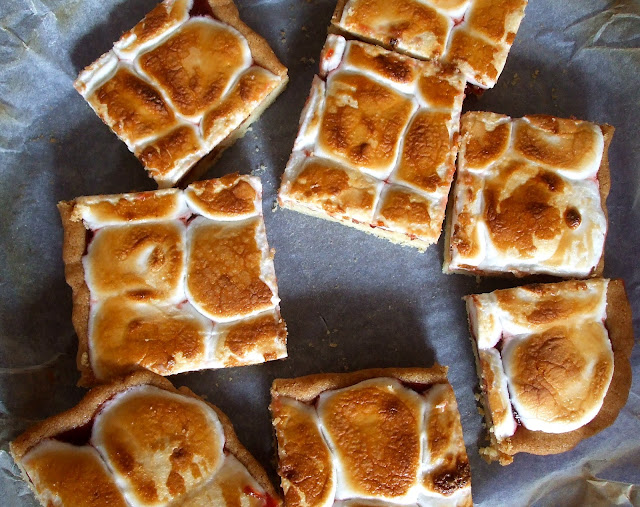 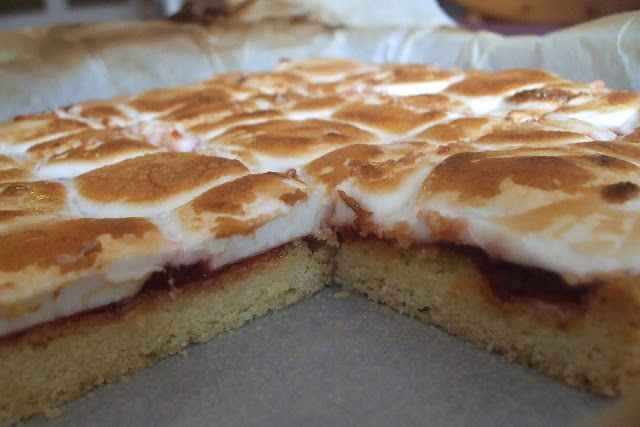 If My iPhone Camera Could Talk...

There are a lot of reasons why most of the stuff I bake doesn't make it onto this blog. A lot of the time it's because people order cakes that I've already posted recipes for - I've lost count of the number of Cookies and Cream cupcakes I've made in the last two years but I'd say it's something in the region of 7, 342, 432. Or thereabouts.
Sometimes I don't like the final product enough to blog it or I don't like the pictures I took on my camera or I don't get a chance to take photographs and I absolutely refuse to post recipes without photos! What is a food blog without the food porn after all?
For a lot of reasons, I'd say 70% of my baking doesn't make it on here.

So today's post is a short one. And a visual one. It's behind the scenes, an up close and personal look at some of my baking over the last year :)

Have a good weekend! This is my first (and last) weekend for a while where I've got lots of time to myself to do as I choose so I'm planning to go cra-a-azy and ... do ... absolutely nothing. 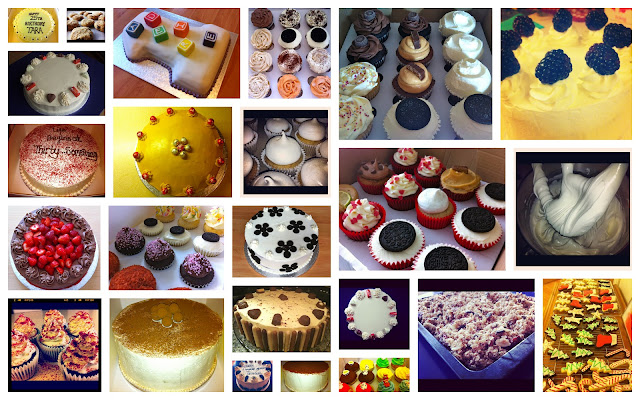 Update: It's been pointed out to me that I didn't supply my Instagram handle in case any of you wants to follow me on Instagram ... my apologies; it is vickii373
Posted by Unknown at 12:34 5 comments: 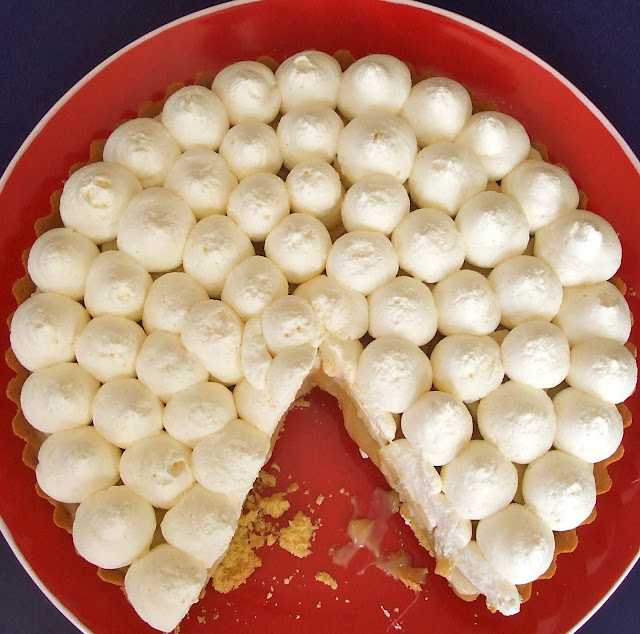 On Friday night, the lovely Ceri of Cucina Ceri (a great food blog full of recipes influenced by Paleo nutrition) cooked dinner for Adura (who has an inspiring blog that covers everything from exercise and nutrition to natural haircare) and I. The plan was to eat and watch Disney movies - yup, I know it's a pretty wild thing to do on a Friday night, but what can I say, that's just how we roll - but as we're all bloggers, we frequently interrupted 'Beauty and the Beast' and 'Tangled' to share blogging wisdom.
I left pretty inspired because they film videos and update their blogs frequently and I at that time had not updated my blog for a few weeks!

So as a result, I'm making it a small mission to start blogging regularly. You can expect to see new recipes and ignore enjoy my going ons at least once a week and maybe, just maybe, even more regularly. But don't hold me to that last bit!

Today's recipe is a classic dessert that is pretty easy to make. If my mum who is one of the world's most incompetent cooks, can nail this every time, then that is saying something. In my mum's defence, she is one of the most intelligent human beings in the world (no exaggeration - she is a doctor whowas third or something in the whole of Greece in her university entrance exams) but she has no interest in cooking whatsoever. She never has. Despite this, she has a pretty good repertoire of dishes she makes wonderfully for when we have guests.

The ease of Banoffee Pie is that the pastry case is ready, you can buy ready made whipped cream in a can with a nozzle thingie but I much prefer to make my own and slicing bananas, well, anybody can do that. So give it a go and I guarantee you it'll become your go-to dessert when you want to make something quick and amazing. I completely forgot how good it is till someone made one for a church lunch a few months ago and as soon as I remembered, I couldn't wait to make it again!

ps: I check the spelling of 'dessert' every time I write it to make sure it's referring to puddings rather dry land without water that gets really cold at night. This is particularly embarrassing for me since a) I LOVE desserts and I should know how to spell it and b) I pride myself on my spelling skills. Ah well, to paraphrase something I saw on Pinterest recently, it just wouldn't have been fair if God had made me as awesome as he did AND given me flawless spelling skills ;)

Ingredients
1 sweet pastry case (I bought mine at Waitrose but Sainsburys Taste the Difference range do a good one)
1 397g tin of condensed milk (Carnation also does the caramel - if you can find it, skip the step below for making caramel from condensed milk)
3 medium bananas, sliced
300ml double or whipping cream
1 tablespoon caster sugar

1 - To make caramel: I recommend you do this the night before. Place the tin of condensed milk in a pot, side down, cover with water and bring to the boil. Then reduce heat till water is simmering and leave it covered, for three hours. Please watch it and top up the water frequently so that it is never dry. (Apparently the tin will explode if the water dries up). I often make more than one tin at a time and just keep the spare unopened tins in the cupboard till I'm ready to use them again. 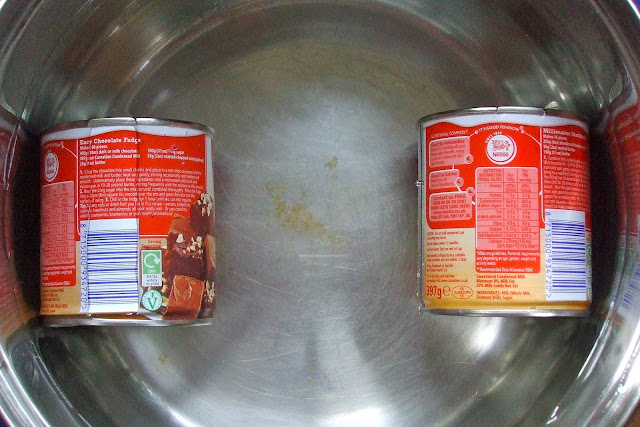 2 - Take it off the heat and leave it until it is completely cool. This might take a few hours. Now you have your caramel. 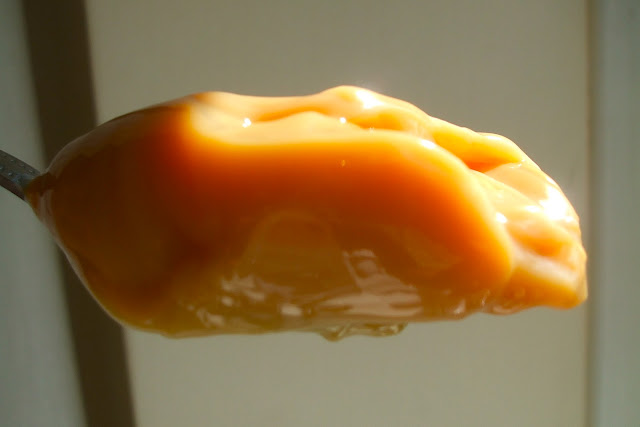 3 - To make whipped cream: Pour cold cream into a bowl. Add in the caster sugar. Using an electric mixer with the whisk beaters (if you have them) and starting on a low speed, whisk cream slowly increasing speed as it thickens until it is so stiff that you could turn the bowl upside down and it wouldn't fall out.

4 - Assembly: Place your sweet pastry case on a plate. Spread your tin of caramel evenly over the base of your case. Arrange your bananas over the caramel sauce. Finally, using a spatula, spread or pipe your whipped cream over the layer of bananas. 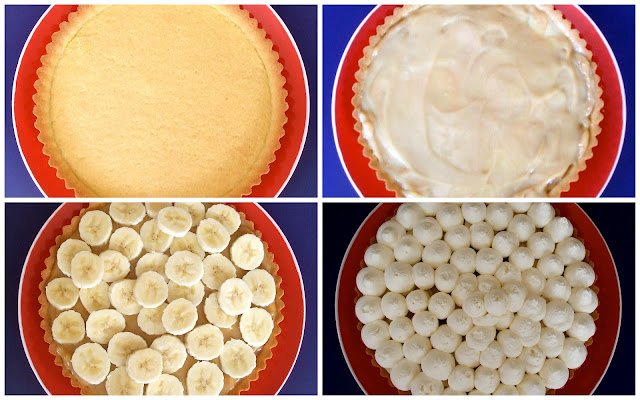 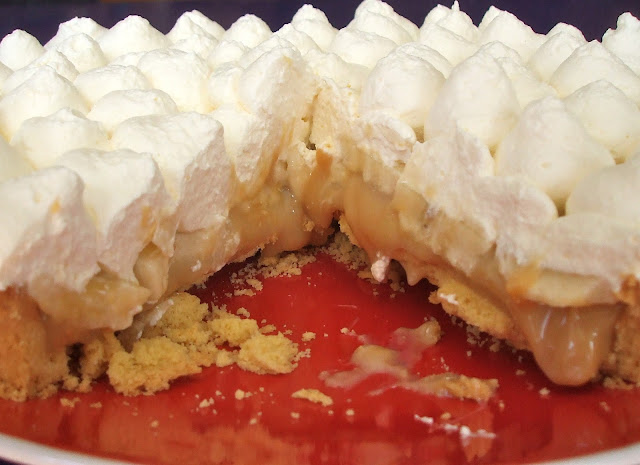