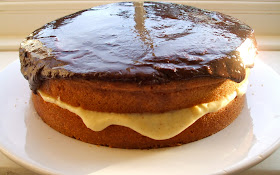 Has anyone seen the new movie 'I don't know how she does it'? Apparently Sarah Jessica Parker's character is obsessed with lists which help her juggle her wife, mother and busy professional balls. I totally get her. I too, am obsessed with lists!

At present, I have 22 lists in my iPhone 'notes'. They range from my permanent shopping list to a list of songs I want to download and a bunch of quotes that I love and want to keep to hand (sample: "According to aeronautical experts, a bumble bee cannot fly because of the asymmetric relationship between its body shape, size and wing span. She doesn't know this however, and flies anyway").

As usual, there is a link (albeit, as usual, tenuous) between my enlightened write-up random chit chat and today's recipe. And that is my 'to cook/bake' list. This list contains the recipes that jump out at me from all the numerous recipes I book mark and post-it-mark in my cookbooks. If I love it, it goes on here so that I remember it when I have time to bake 'just because'. And this Boston Cream Pie (not a pie, as the name misleadingly implies, but a cake) has been on my list for a very long time!

It is from my favourite Nigella book and as usual the recipe didn't let me down. I LOVE the creme patissiere filling but for some reason, the oil seemed to separate from the butter and chocolate in my ganache so it looked very oily. A few hours later, it was fine but you will notice the oily sheen in my pictures. If anyone knows why this happened, please enlighten me. I should also point out I always struggle with ganache so maybe it's just me!


Recipe from Nigella Lawson's 'How to be a Domestic goddess'

For the creme patissiere


The cake
1 - Preheat the oven to 180C/gas mark 4. Grease and flour 2 x 21cm sandwich tins
2 - Cream the butter and sugar, add the vanilla and then the eggs, one at a time, adding a spoonful of flour between each
3 - Fold in the rest of the flour (and the cornflour if using), and when all is incorporated, add a little milk as you need.
4 - Pour and scrape the batter into the tins 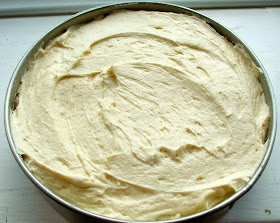 bake for about 25 minutes, until the cakes are beginning to come away at the edges, are springy to the touch on top and a cake tester comes out clean..

Creme Patissiere
5 - When the cake is in the oven, warm the milk and cream in a saucepan along with the vanilla pod split length-wise. 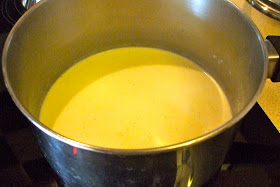 6 - Bring to the boil, then remove from the heat, cover and let stand to infuse for 10 minutes. If you're not using the pod, add the vanilla extract later, when you've combined all the ingredients.

7 - In a large bowl, whisk the yolks and sugar until creamy, 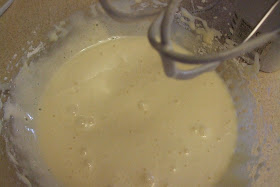 and then beat in the flour.

8 - With the point of a small, sharp knife, scrape the seeds out of the vanilla pod into the milk, and add this warm milk to the egg mixture and whisk until smooth

9 - Pour back into the saucepan and stir or whisk gently over a low heat until the custard thickens. 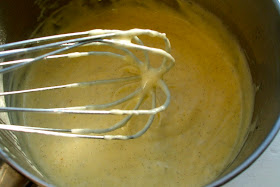 Remove from the heat and let the custard cool by pouring it into a wide bowl and tearing off some greaseproof paper, wetting it, then covering the bowl with it. This stops it forming a skin. Don't put it in the fridge. 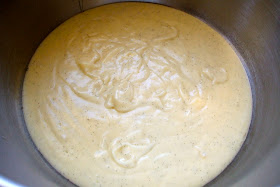 10 - When the cakes are done, sit them in their tins on a wire rack for 5-10 minutes, then turn out and cool directly on the rack. When the cakes and the creme patissiere are cool, you can make the chocolate ganache.

Chocolate Ganache
11 - Warm the cream, vanilla extract and butter with the chocolate, chopped into small pieces, and bring to the boil in a thick-bottomed saucepan, by which time the chocolate should have melted.

12 - Remove from the heat and whisk till smooth and thickened. Let cool a little before using, but you still want it runny enough to ice with

13 - Sit one of the cakes on a plate or cake stand and spread with the cooled creme patissiere, 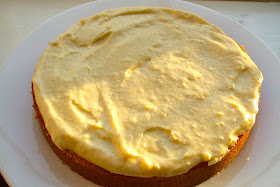 then top with the second cake. Dollop spoonfuls of the chocolate icing on top, letting it spread and drip down the sides of the cake 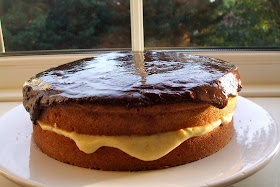